It is one of the most ancient stories wending it's way through modern history.  The hotheads of late have coined the term creative destruction.  But this concept of replacing old with new,  or innovation upending tradition, is no more novel than the concept of change itself.

There is nothing truly original in the world.

I ease off the gas pedal of my already outdated hybrid Prius.

My job will eventually fall prey to a computer named Watson.  My practice will be gobbled up by the nearest Goliath medical center as history scoffs at the arthritic physician bending over a doorbell with leather bag in hand.

There is no flash of glory here.  No smart technology.

The echo vibrates through cracks in the sidewalk and drags me unwillingly forward to the unkempt house at the end of the block.

I open the door without knocking and find a decrepit figure slumped into a reclining chair in front of the television.  His car keys were long ago taken by some relative or another.  He waits for nothing in particular.  Scraps of food have been left on the side table by a home health aid.

There are memories of being gainfully employed.  Road trips across barren lands and such.  His son is now grown up and makes decisions on his behalf.  A nursing home is a far safer environment than this empty old house.

My visits to the end of the road are numbered.

Old is replaced by new.

And by and by something is lost.
Posted by Jordan Grumet at 5:59 PM 1 comments

Till Death Do Us Part

Even though they were such carelessly spoken words back then, Jill took her vows seriously. Till death do us part.
She was just a child when she married Tim. He, a few years her senior, was like a father figure. But they grew together: first professionally and then personally.
When the kids came, everything changed. He spent late nights at the office, and she transitioned her schedule to part-time so she could be home in the afternoons.
Jill’s love grew and expanded. Of course the romance was still there, but what she valued as she grew older was the companionship. Her and Tim were partners in every sense of the word. They traversed life’s paths together, avoiding roadblocks, and choosing carefully for their little family.
The kids were well into high school when Tim developed the numbness and tingling. Jill wasn’t concerned in the beginning, until his symptoms progressed. A flurry of doctor’s appointments later, they held hands in the neurologist’s office and listened attentively to his description of multiple sclerosis....

Read the rest of this post at The Medical Bag.
Posted by Jordan Grumet at 12:49 PM 0 comments 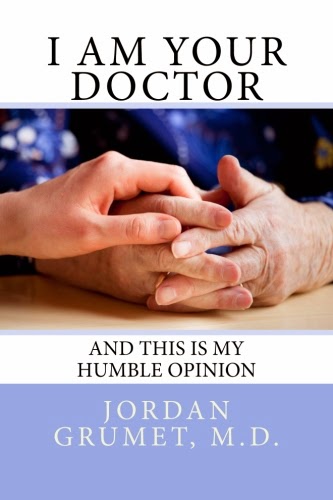 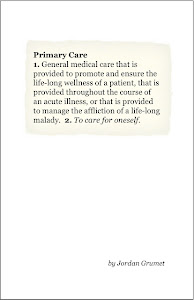